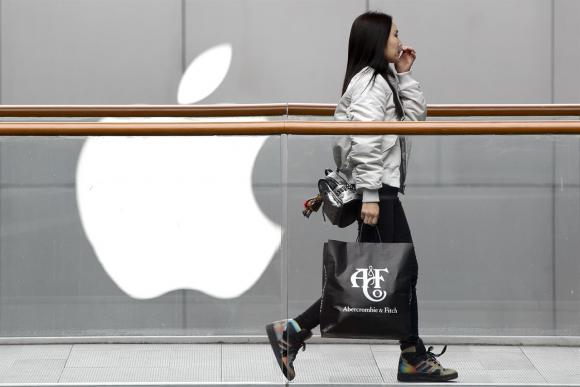 Companies that do business with China walk a fine line to stay aligned with U.S. values such as freedom of speech and democracy while avoiding offending China, where they stand to make billions of dollars. Photo: Andy Wong/AP

As China sanctioned the National Basketball Association this week for a pro-Hong Kong message delivered by one of its team leaders, other American companies scrambled to avoid fallout of their own.

Tiffany & Co., which relies on the Chinese market for double-digit revenue growth, scrapped a global advertising image that some in China perceived as supporting Hong Kong protesters, even though the company said the image was taken weeks before the demonstrations began.

Blizzard Entertainment, the Irvine, Calif.-based video-game giant, suspended a professional player for one year for reportedly shouting “Liberate Hong Kong!” during an interview.

China has long been sensitive about its image at home, controlling what it allows Western businesses and its own citizens to say or do there. Now, however, with Hong Kong in its fourth month of street protests, China is increasingly imposing the same strictures on what’s said about it beyond its borders.

“This is core to Xi Jinping’s narrative about recapturing China’s greatness,” said Elizabeth Economy, director for Asia studies at the Council on Foreign Relations, referring to the Chinese president.

“Whenever they see evidence that the international community is supporting Hong Kong or Taiwan as independent entities, they try to find ways to bring dissenting voices in line,” she said. “They don’t tolerate dissent on this topic inside China, and increasingly they are not tolerating dissent on these issues outside China.”

The tension underscores how reliant vast sectors of the U.S. economy are on China, not just on the nation’s consumers but on the blessing of Beijing’s leaders. And it raises questions not just about how American companies will shape their products and services to cater to the Chinese market, but also about how flexible they will be on traditional American values of free speech and democracy.

From hospitality and Hollywood to technology, American companies have increasingly been bending to accommodate China in recent years.

“I think if you charted it out, there’s been a dramatic increase in these incidents in the last five years. That’s all about the Chinese Communist Party regime throwing its weight around and feeling it now has the leverage and confidence about using the power of its market to apply pressure,” said Aaron Friedberg, a China expert at Princeton University who served as an adviser to former vice president Richard B. Cheney.

“They’ve done this in the past for other reasons, to extract technology from American companies,” he said. “Now they’re using it for bigger, more visible political issues.”

Consumer companies with high visibility among American and Chinese citizens have faced particular wrath from China in the aftermath of perceived slights.

Tiffany’s troubles stemmed from an ad showing a female model holding her hand over her right eye. Some in China saw it as a sympathetic reference to a Hong Kong protester who was shot in the eye in August.

The ad ran in print and online inside and outside China. Tiffany denied it had any relation to the Hong Kong protests, which began in June and intensified over the summer.

“This campaign image, which was photographed in May 2019, was in no way intended to be a political statement of any kind. We regret that it may be perceived as such, and in turn have removed the image from our digital and social media channels,” the company said in an emailed statement.

On a website for its Hearthstone game, Blizzard on Tuesday said it had ejected a player nicknamed “Blitzchung” from a tournament for violating competition rules in a way that brought “disrepute” to the player, offended the public or damaged Blizzard’s image. The company didn’t respond to a request for further comment.

Other companies have gotten into trouble for perceived slights relating to Taiwan or Tibet. Last year, Marriott International apologized to the Chinese government after listing Taiwan, Tibet, Macau and Hong Kong — all territories China claims — as stand-alone countries on an email questionnaire it sent to members of its rewards program.

Mercedes-Benz issued an apology after offending Chinese consumers with an ad quoting the Dalai Lama. Outside China, the 82-year-old spiritual leader is among the world’s most popular figures, known for his teachings on peace and compassion, as well as for supporting an autonomous Tibet. The Chinese Communist Party, however, considers him a political agitator.

After his social media account was inundated with criticism, Morey deleted his tweet and Rockets owner Tilman Fertitta unsuccessfully tried to distance his organization from the sentiment. As Chinese media partners and sponsors quickly cut ties with the Rockets, the NBA issued a statement Sunday expressing “great respect for the history and culture of China” but also defending Morey’s rights to free expression. The NBA did not discipline Morey.

In response, CCTV, the Chinese state television network, canceled its broadcasts of preseason games in China this week, and Chinese retailers like Alibaba removed NBA merchandise from websites.

NBA Commissioner Adam Silver issued a statement Tuesday reaffirming his defense of Morey’s freedom of expression, saying that the NBA “could not operate” if it attempted to regulate what players, employees and owners said on political issues. Silver also stressed the league’s “great affinity” for China, and told reporters that he would attempt to repair relations during his visit to China this week.

But China watchers said rapping the knuckles of a popular sports league ensures that a wide swath of Americans get the message. That’s important to Beijing as it sees broad support for the Hong Kong protesters in the Western press and on social media, experts said.

China’s influence has grown alongside its market potential for Western companies.

The NBA’s global aspirations rely heavily on China, with Silver in June referring to the country and its population of 1.4 billion as an “enormous opportunity.” The NBA began hosting exhibition games in China in 2004 and officially opened a China office in 2008. Although China will not broadcast the games, the Los Angeles Lakers and Brooklyn Nets will play this week in Shanghai and Shenzhen, continuing a longstanding tradition of sending high-profile teams to China during the preseason.

Meanwhile, superstars such as Kobe Bryant and LeBron James have regularly made pilgrimages to promote their sneakers. Numerous NBA players, including former Miami Heat star Dwyane Wade, have signed promotional deals with Chinese sneaker companies rather than American brands. And NBA teams including the Houston Rockets and Golden State Warriors have designed and worn jerseys aimed specifically at the Chinese audience.

According to league figures, 640 million Chinese viewers consumed NBA content during the 2017-18 season, and the NBA’s most recent five-year extension with Chinese online entertainment giant Tencent was reportedly worth $1.5 billion. Tencent announced that 21 million people used its service to watch the decisive game of the 2019 NBA Finals — topping the television viewership number in the United States.

Silver told reporters this week in Japan that the league had already felt “fairly dramatic consequences” from Morey’s tweet. A Chinese boycott of the NBA would do significant damage to the league.

Some industries are increasingly anticipating Chinese sensitivities and working to avoid them.

To win China’s coveted film distribution slots, Hollywood has tried to avoid content that authorities find morally or politically offensive. In some cases, this has extended to outright changes after a movie has been shot. The producers behind the reboot of “Red Dawn” earlier this decade altered the film in post-production so the villains were from North Korea instead of China.

In other instances, Hollywood has included references to Chinese genius, as in the disaster movie “2012,” in which Chinese scientists rescued civilization.

Marvel shot some of “Iron Man 3” in the country with the help of Chinese investment. New scenes were added specifically for the Chinese release. Hollywood studios often partly finance their films with Chinese investors, deepening the relationship.

China is the world’s second-largest market by box office revenue, and Hollywood has often reaped the benefits. Studio movies took in more than $2 billion in the country last year. Officially, though, only some 38 Hollywood films are allowed to play in Chinese theaters, according to the rules of the government-run China Film Group. This causes a scramble among studios to please authorities.

The U.S.-China trade war has lent these efforts a fraught quality; many big-budget films have been unable to secure slots since the conflict intensified. Disney remains the exception. The company — which has partnered with the Shanghai government on a theme park there — is still seeing many of its offerings available in the country.

For now much of Hollywood seems content to keep its head down and steer clear of the controversy that has gripped the NBA — so much so that John Penotti, the Los Angeles-based producer of “Crazy Rich Asians,” who conducts business throughout Asia, said entertainment officials on both sides of the Pacific are avoiding the subject of the Morey backlash.

“I haven’t heard a single person bring it up in conversation in the past few days,” he said. “It’s kind of amazing.”

Today we see the beginning of future “clash of civilizations”. China - the leader of “ultraindustrial civilization” – uses its great economy and modern technologies to make the “digital slavery” inside country and to lash other states. The main aim – to force Americans (and other people of the world) not to say any world against the “digital slavery”.

USA – the leader of postindustrial civilization – looks for methods to resist ultraindustrial pressure.